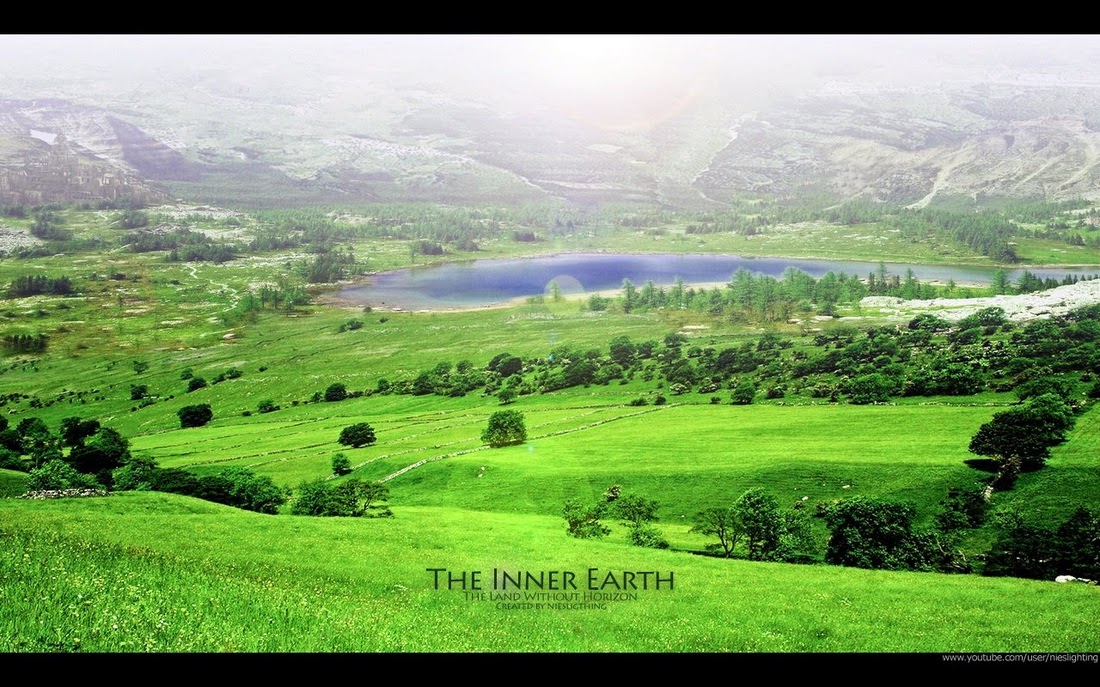 Of all the Inner Earth literature read by this group, Warrior of The Soul mirrors our experiences most accurately. The free, online book by David Pratt is well written and details an initiation into Inner Earth.

They had entered a network of tunnels in the earth’s crust, travelling deeper and deeper into the cavern world, a zone of inner light and life. Finally Sahula had realized where they were headed: to the Inner Circle, the Imperishable Sacred Land, the concave inner surface of the hollow earth. After several adventures he had arrived there – where he had spent most of the past seven years. What he had learned and seen there was etched on his memory for ever. There he had met his present master, Zoro, under whose guidance he had begun to develop his occult powers – powers that could wreak havoc if wielded by people still addicted to selfishness and bigotry. And a few weeks ago, just before Sahula’s departure for the outer circle, his master had presented him with a choice of two possible futures: if he followed the first he would be dead within two months, and if he followed the second he would live in his present body to a ripe old age. Yet it was no easy choice and he had another seven weeks to make up his mind.    So here he stood. On this memorable spot. Five miles from the monastery he used to attend and where he was currently staying. And just twelve miles from the village where his mother and sister lived. But his master had prohibited him from visiting the village, and from physically seeking out or communicating with any of his relatives or former friends. He had been allowed to make one brief astral visit to the village, though not to his mother or sister, and had already made use of it. The rules of the Brotherhood did sometimes seem unnecessarily severe, even to him.    ‘Hey, Warrior, have you fallen into a trance again?’    Sahula looked up startled. It was Jintar, his travelling companion, five years his junior. Jintar was the first person he had met after reaching the Inner Circle. Sahula now had the task of watching over him and introducing him to the ways of the upper world – or ‘hell’ as the adepts often called it.    The two of them had arrived at the monastery about a week ago. They had emerged from the cavern world about seventy miles away and had travelled most of the way to Sahula’s old monastery on horseback, the horses being supplied by the Brotherhood’s agents along the route. Jintar and Sahula’s current duties mainly related to the deeper esoteric studies pursued by members of the monastery’s small inner circle, but they also took part in the outer rituals and ceremonies. This was Jintar’s second visit to the upper world. About five years ago he had spent a day in Egypt. However, it had not passed without incident; he had been violently assaulted and had been lucky to escape with his life – his back still bore the scars.    ‘There’s certainly some very beautiful scenery and landscapes in the outer world,’ Jintar remarked, ‘though the colours are much duller and plainer than in my own land. The stars, on the other hand, are magnificent. But I don’t like the changeable climate, the gloomy darkness, the often biting cold, and the stronger gravity which makes me feel so heavy and tired. And why do you need so many different languages? I’m finding it hard enough to master your own native language. And I’m not too keen on the outer-circlers, who seem such a vicious, murderous and sex-crazed breed. The astral tour that you and Dazak recently took me on clearly showed that your big cities are no better than stinking cesspools. In fact, the lowest regions of the astral world are just a nauseous, squirming mass of filth and pollution.’    ‘Don’t exaggerate, Jintar,’ Sahula replied. ‘And remember that the people who live here are in essence the same as you, your brothers and sisters. It’s just that most of them still have even more weaknesses to overcome, and . . .’